What To Do About Chronic Ear Infections in Children

According to the NIH, five out of every six kids have at least one ear infection by their fifth birthday. Ear infections are so common in children and babies that they account for more visits to the pediatrician than any other single ailment. Doctors refer to ear infections as “otitis media,” which means an infection in the middle ear. 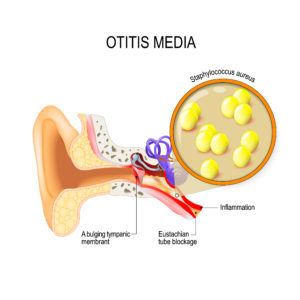 The ear, nose, and throat (ENT) experts at Pediatric ENT Specialists at Children’s of Alabama in Birmingham, Alabama, know how painful and frustrating otitis media can be for babies and children. Though most earaches are easily treated with at-home remedies or antibiotics, if your child has chronic ear infections, they may need other therapies to alleviate their pain and prevent hearing damage.

Although you can develop an ear infection at any age, children and babies are more likely to get them because they have proportionately shorter Eustachian tubes than older kids and adults do. Eustachian tubes are the little canals that run from the middle ear — right behind the eardrum — and drain into the upper part of the throat. Babies’ and children’s Eustachian tubes are also more parallel to the middle ear than adult tubes are, which means that fluids that build up behind the eardrum are less likely to drain through the throat, even when the child is healthy. That’s why children are more susceptible to swimmer’s ear than adults are.

Types of ear infections, from most common to least, are:

In this most typical type of earache, the middle ear is infected and swollen, trapping fluid behind the eardrum. In addition to pain, your child might have a fever.

After an ear infection, the fluid sometimes remains trapped behind the eardrum. Your child may not have any symptoms, but your pediatric ENT can visualize the trapped fluid with a special instrument.

The fluid can remain trapped behind the middle ear or return over and over, even if there isn’t an infection. This condition may affect your child’s hearing and also makes it difficult for them to fight new infections.

Symptoms of an ear infection

Ear infections tend to be painful. Older children can tell you if their ear hurts. Babies may alert you to an earache by tugging on or rubbing their ears. Other symptoms of an ear infection or chronic otitis media include:

If your child has an earache or has symptoms of an ear infection, contact your pediatrician as soon as possible. Some ear infections may clear up on their own.  You can control pain with:

Your child may need antibiotics or other medications, such as prescription ear drops, to kill the bacteria. If your child has a viral infection, however, antibiotics won’t work.

If your child gets multiple ear infections over the course of 3-12 months, your pediatrician may recommend placing a special myringotomy tube in your child’s ear to help drain the excess fluid away. Our pediatric ENTs perform the minimally invasive surgery in a state of the art operating room. They make a tiny opening in the affected eardrum and then place a very thin tube to drain the fluid. Taking the pressure off the eardrum also restores your child’s hearing to normal.

After your ENT has placed the tube, you bring your child to the office periodically to make sure the tube’s still in place and to ensure that the fluid is draining well. Your ENT specialist also evaluates your child’s hearing. In most cases, the tubes fall out on their own after about 12-18 months.

Schedule an Evaluation in our Birmingham Office Today

If you’ve noticed that your child keeps getting earaches or has trouble hearing, contact the friendly, highly skilled otolaryngologists at Pediatric ENT today to schedule a chronic ear infection evaluation.