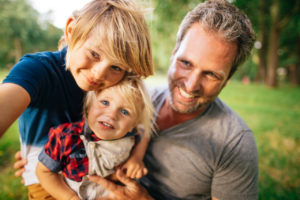 Earaches and ear infections are a common ear conditions in young children in Birmingham because their Eustachian tubes, which run from the middle ear to the back of the nose, are not fully developed. In adults, the Eustachian tubes (also known as the auditory tubes or pharyngotympanic tubes) are slanted and fully opened, which encourages the drainage of fluids.

However, in young children, the tubes tend to be oriented horizontally and may even be partially closed, which can lead to a build-up of fluids in the middle ear. The pressure from these undrained fluids is what causes the pain of an earache and may even cause an infection in the middle ear (otitis media). Having a cold or the flu may also lead to the accumulation of bacteria-rich mucus, increasing discomfort and raising the risk for a serious infection. If you suspect that your son or daughter may have an earache, schedule an appointment with an ENT specialist at Pediatric ENT Associates in Birmingham, AL for an evaluation and ear infection treatment.

How Do I Know If My Child Has an Earache?

Babies and young children will not be able to tell you what’s wrong. Some symptoms of an earache or ear infection include tugging at the ears, stumbling or loss of balance, crying more than usual, having difficulties sleeping, a reddened inner ear and/or eardrum and a fever of 102 degrees or more.

Most earaches are self-limiting and will dissipate within minutes to hours. You can help alleviate your child’s discomfort with a warm compress held to the ear and/or children’s aspirin. Longer earaches or a pediatric ear infection accompanied by temporary hearing loss or difficulties requires a trip to the pediatrician for possible drops and/or antibiotics.

If your child suffers from multiple, chronic ear infections, he or she may be at risk for permanent hearing loss and gait problems, as the middle ear controls balance. What constitutes a chronic infection? According to the American Academy of Pediatrics, children who have three ear infections in six months or four infections in a year are good candidates for a myringotomy tube, otherwise known as an ear tube. This tiny tube is inserted into the eardrum and placed so that it encourages fluid to drain out, alleviating pressure and restoring hearing. The simple and quick surgical procedure is done on an outpatient basis.

Regular follow-up visits are recommended over the next 12 to 18 months to ensure the tubes continue to drain fluids properly. The tubes generally fall out by themselves, although a more permanent type of tube is removed surgically.

Here are four reasons why ear tubes are the best remedy for children who have chronic ear aches or infections:

Ear Tubes Cause No Discomfort

Because the tubes are inserted deep inside the ear, your child will not feel them. He or she can participate in all normal daily activities without your needing to worry about displacing or accidentally removing the ear tubes. They will naturally fall out by themselves after about a year to 18 months.

In some more severe cases, a permanent tube will be inserted and left in place for several years. Once the Eustachian tubes have fully developed enough to properly drain fluids from the middle ear, your pediatric ENT in Birmingham will remove the tubes surgically in an outpatient procedure.

After the child’s ear tubes are in place, there is nothing further you must do to maintain them. Your board-certified pediatric ear, nose and throat specialist will probably prescribe ear drops during the infection, but these will be discontinued once the infection has subsided. You will not need to administer antibiotics by mouth.

It is advised that you bring your child for follow-up exams every several months to be sure the tubes are functioning properly.

The ear tubes will give immediate relief and improve the hearing of a child who is already feeling that sounds are muffled or lost. By draining the fluid constantly through the ear tube and avoiding build-up, you are also circumventing the possibility of permanent hearing loss that may occur in chronic instances of fluid blockage and infection.

Unless your child in Birmingham has severe infections requiring the placement of a permanent ear tube, you do not have to worry about having it removed surgically. Ear tubes will fall out by themselves after a year to 18 months. The hole in the eardrum caused by the tube will, in most cases, heal by itself.

If your child has been suffering chronic ear aches and infections, the board-certified ENT specialists at Pediatric ENT Associates will ensure he or she receives the best care possible before, during and after surgery. You can reach us at our offices in Birmingham, Alabama at 205-831-0101 or via our online contact form.