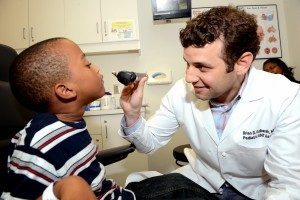 If your child complains of breathing difficulties, particularly on one side of the nose, it’s possibly due to a nasal obstruction caused by a deviated septum. Although the problems may not be too severe or cause your child too much distress, it can still cause you concern and may need the expertise of a medical practitioner.

At Pediatric ENT Associates at the Children’s Hospital of Alabama in Birmingham, Alabama, we understand that any type of health concern that your child has is cause for sleepless nights and worry. That’s why if you notice that your child has problems breathing through the nose or unusual nasal discharge, you should contact us to schedule a consultation with our ENT specialists to evaluate the condition and devise a customized solution to get your child’s breathing back on track.

What Is a Deviated Septum?

First, it’s important to know exactly what the septum is. It is cartilage that forms a “wall” that separates the nostrils. Essentially, it divides the nose into two separate, usually symmetrical, chambers.

When the septum becomes abnormally configured for any reason, such as when the wall is displaced to one side and causing asymmetry, it is a deviated septum. One nasal passage becomes smaller than the other one; in fact, the overwhelming number of cases we see involve the nasal septum being off center because the septum has shifted from the midline, often severely.

What Are the Symptoms of a Deviated Septum? 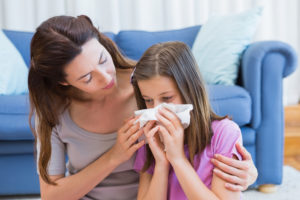 Although the signs of a deviated septum are not always readily noticeable, the most common symptom is difficulty breathing through the nose. In many cases, the symptoms are more problematic on one side. Sometimes, sinus drainage is inconsistent or severely reduced, which can lead to repeated or chronic sinus infections.

Other symptoms could include:

This can occur in one or both nostrils and make it difficult to breathe and can also result in noisy breathing while sleeping. If the latter has become a problem recently, especially in an infant or younger child, see a Otolaryngologist.

Discomfort Sleeping On a Particular Side

If one of the nasal passages is smaller due to the deviation, it may be uncomfortable to sleep on the same side.

This happens due to dryness in the septum.

This can be a sign of a severe deviation because the inside nasal wall is affected.

This so-called cycle is when the nose has alternating obstructions from one side to the other. While this is often not noticeable. However, if it becomes noticeable to the point of awareness, this could mean a deviated symptom.

Keep in mind that a deviated septum is not usually a serious health issue. Yet, when it is severe, it can cause breathing difficulty through the nose, and your child may experience more discomfort during a cold or allergy outbreak. That’s why you may want to see a pediatric otolaryngologist or ENT specialist and discuss ways to correct this.

What Can Cause a Deviated Septum?

A deviated septum can occur or may be present for several reasons:

Sometimes, a deviated septum happens during the development of the fetus and will be present at birth.

This can occur to infants during birth and to children for any number of reasons: while playing sports, automobile accidents, falling and hitting their nose, or simply playing around with other children.

The nasal structure can change greatly as your child gets older, which can worsen a slight deviation that’s already present yet asymptomatic.

Sometimes, a deviated septum can occur due to complications from previous medical treatments.

How to Fix a Deviated Septum

Your child can experience nasal obstruction from simple swelling of the tissues in the nose, which medications may help correct.

However, if the nasal obstruction is due to a deviated nasal septum, there are several ways to manage or correct it, including surgery. That’s why, to get proper treatment customized specifically for your child, it’s so important to visit a pediatric ENT specialist for an expert diagnosis on your child’s breathing problems.

Keep in mind, the only true way to correct a deviated septum is a surgical procedure called septoplasty. While this option is more invasive, this will not simply manage the symptoms but usually eliminate them and restore normal breathing.

The procedure is designed to repair the placement of the nasal wall, which allows air to resume its easy flow through the nasal cavity. Although septoplasty can repair a deviated symptom and cease all symptoms, it will not eliminate such conditions as chronic allergies or issues with the lining of the nasal passage. Also, a septoplasty is different from a rhinoplasty or cosmetic procedure and will not change the outside appearance of the nose.

While we generally do not recommend such septoplasty if your child is very young, it does depend on other factors such as the severity of the symptoms as well as the deviation itself.

As with any surgical procedure, temporary side effects after septoplasty can occur, including:

It’s also important to be aware that healing is gradual. It’s possible that a modicum of swelling could persist for months, particularly on the tip of the nose, and that the full results may not become apparent for months, even as long as a year.

A septoplasty is a surgery that addresses issues with the septum, the nasal wall that separates the nostrils, which can include a deviated septum. This is an outpatient procedure that requires local or general anesthesia and can take between 1-3 hours.

How to Prepare for a Septoplasty

As with most any surgery, your child should not eat, drink, or chew gum the night before their procedure. Our pediatricians will give you an exact time frame for when to stop during the consultation. Your child also might need to take medication before their procedure or stop taking other medication. This is something your doctor will discuss with you in detail ahead of time. Be sure to not forget to bring your insurance information. You might also want to bring the following:

Recovery from a Septoplasty

Your child will feel drowsy after surgery. Encourage them to rest at home with their head elevated. They should not partake in any strenuous activity, including swimming, or blow their nose for 2 weeks after. If they need to sneeze, they should do so with their mouth open. You should apply a saline spray to your child’s nostrils 3 to 4 times daily to keep their mucous membranes from drying out.

They may experience nasal drainage for three to five days after surgery, which may be clear or bloody. If bleeding persists for more than 15 minutes, please call your pediatrician. Your doctor will remove the nasal splints at your child’s follow-up appointment.

What is the Septum?

It is the cartilage in the nose that forms a “wall” separating the nostrils and dividing the nose into two separate chambers that usually symmetrical in size.

What is a Deviated Septum?

My Child Has Breathing Problems – is This Because of a Deviated Septum?

Not necessarily. It’s not uncommon for children – or anyone, for that matter, to experience nasal obstruction from time to time, usually due to a cold or allergies. However, if it persists, then see a specialist at Pediatric ENT Associates for a professional evaluation of your child’s condition.

Are There Other Symptoms of a Deviated Septum Besides Trouble Breathing?

Yes, although in many cases, there are no visible (or audible) signs of a deviated septum. These other signs could include regular nasal bleeding, discomfort sleeping on a particular side, facial pain.

In some cases, yes. Such medications include nasal decongestants, nasal sprays (including steroid sprays), and antihistamines. However, these aren’t always permanent fixes and can cause other complications.

Surgery Seems Too Much for this Condition – is it Really Necessary?

In some cases, a septoplasty is necessary to repair the nasal wall placement and allow air to resume its normal, easy flow through the nose. Our pediatric ENT surgeons are specialists who are experienced and highly trained, and they have a long track record of success performing septoplasties on children just like yours to correct a deviated septum.

If Surgery is Necessary, Will This Cure My Child?

A septoplasty can repair a deviated symptom and stop all symptoms, but be aware that it will not eliminate chronic allergies or issues with the lining of the nasal passage. It does depend on the severity of the symptoms and issue, as well as other factors, but this procedure has a very high rate of success in eliminating symptoms and restoring your child’s normal breathing.

How Long Would Any Side Effects From Surgery Impact My Child?

As with any type of surgical procedure, temporary side effects can occur, including minor bleeding for the first few days, facial puffiness, a sore nose, swelling and/or bruising around the eyes, and a persistent dull headache for several days.

When Can My Child Have Proper Breathing After a Septoplasty?

Healing is typically slow and gradual, and some amount of swelling, especially on the tip of the nose, may persist for up to a year, after which the full results, including proper unobstructed breathing, should become apparent.

For More Information, Schedule a Deviated Septum Consultation with an ENT Specialist Today

If you are concerned that your child is suffering from a deviated septum, don’t hesitate to contact Pediatric ENT Associates for a diagnosis and treatment plan at our office in Birmingham, Alabama. To learn more visit medlineplus.gov or to make your appointment call 205-289-7469 today!