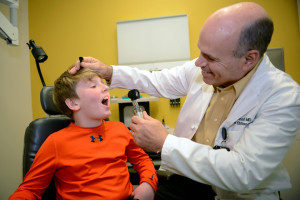 Obstructive sleep apnea is often thought of as an adult’s condition, but it can affect children as well. Around 1 to 4 percent of children under the age of 10 are thought to suffer from obstructive sleep apnea. Children who have this condition are often experiencing restless nights where they are awoken many times, leading to poor health, lack of focus, fatigue, and irritability during the day. Signs that your child may be suffering from OSA include restless nights filled with tossing and turning, snoring, and breathing through the mouth at night.

If you think your child may be afflicted with this condition, please contact Pediatric ENT Associates as soon as possible.

What is this Condition?

Obstructive sleep apnea is a condition in which the airways are blocked during sleep, causing breathing to become much more difficult and even stop at times. OSA has been linked to hyperactivity in children, difficulty concentrating and paying attention, sleepiness, poor performance at school, and even bedwetting.

Children with OSA do not have problems breathing during the day; it is at night, when the muscles relax, that the problems occur. Children may attempt to compensate for this difficulty by sleeping with their neck arched back, or sleeping sitting up. If your child exhibits these behaviors, along with snoring or restless sleep, they may have obstructive sleep apnea.

Contact our Pediatric ENT Specialists Today
for an Appointment.

Obstructive sleep apnea in children is most often caused by enlarged adenoids or tonsils. While sleeping, when the muscles are relaxed, the adenoids and tonsils block the relaxed airway, causing difficulty breathing as well as snoring. OSA is more common in overweight children, although children of any size can be affected. However, to improve the symptoms, leading a healthy lifestyle and losing weight may be recommended.

The most common treatment for obstructive sleep apnea in children is the removal of the adenoids and tonsils. Your pediatric ENT specialist will evaluate your child and determine if adenoidectomy and tonsillectomy is the best course of action. In some cases, especially when the child is suffering from other conditions such as craniofacial abnormalities or Down syndrome, other types of surgery or treatment may be needed. In addition, weight loss or treatment of other medical problems may also be recommended for managing OSA.

Tonsillectomy and adenoidectomy surgery will often completely resolve OSA symptoms. In cases where the surgery alone isn’t enough, or in cases where surgery is not recommended, there is a treatment available called Continuous Positive Airway Pressure, or CPAP. This treatment involves fitting a machine to your child which blows air at a steady pressure into the nasal passages, thus forcing the airway to stay open and allowing your child to breathe easily during sleep.

Contact Pediatric ENT Associates in Birmingham for an Appointment

It is not recommended to leave OSA untreated, as it can lead to many other problems if left alone. If you suspect your child may be suffering from this condition, don’t hesitate to contact Pediatric ENT Associates. Call (205) 831-0101 to make an appointment today.

Next, read about Neck Masses.