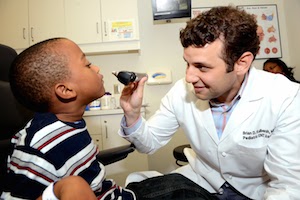 From nosebleeds to sinusitis to sleep apnea, there are many nasal conditions children may endure at some point in their lives. The expert physicians at Pediatric ENT Associates (PENTA) in Birmingham are well versed in the diagnosis and treatment of a variety of these conditions, and will ensure only the best care for your child.

Epistaxis, otherwise known as nosebleed, is not often a cause for alarm, although it may appear frightening. Nosebleeds can occur following a number of causes, including overly dry air, trauma to the nose, harsh noseblowing, or picking the nose. Rarely, a nosebleed may become chronic or have a deeper underlying cause; in these conditions, it is important to see a qualified pediatric ENT specialist to determine the best course of action.

A deviated septum occurs when the nasal wall separating the nostrils is malformed in some way, blocking the even flow of air through the nose. This can occur following an accident resulting in trauma to the nose, or can be present from birth. While deviated septums do not often cause insurmountable breathing problems for children, in cases where breathing is severely impaired, surgery may be considered to correct the septum.

Sinusitis, commonly known as a sinus infection, is an easily treatable condition in children. While sinusitis is fairly common in older children, children younger than six do not have fully developed sinuses, and are therefore unlikely to get sinus infections. The mark of a sinus infection that distinguishes it from a common cold is a persistent cough, a fever that develops significantly after the onset of cold symptoms, ear pain, and dental pain. Take your child to see an ENT specialist at PENTA if you suspect he or she has developed a sinus infection.

Obstructive sleep apnea in children is a condition which can cause many unwanted side effects, such as irritability, restlessness, inattentiveness, and fatigue during the day due to an restless sleep. Sleep apnea affects adults more than children, but it is estimated that approximately one in four children experience the condition. Sleep apnea in children is often caused by enlarged tonsils and adenoids which block airflow at night while the muscles are relaxed. If your child is suffering severe sleep apnea, tonsil and adenoid removal may be the best option to consider.