Warning Signs of an Ear Infection 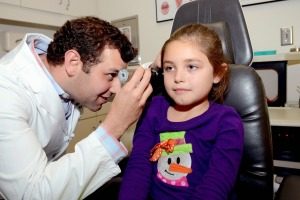 Older children are good at telling you when something hurts and where it hurts. But when you have young children who are pre-verbal or have limited vocabularies, deciphering whether they have an illness or are just being cranky can be complicated.

Ear infections afflict children so often that approximately five out of every six kids gets at least one ear infection before their third birthday.

An ear infection in the middle ear — otherwise known as otitis media — is the most common ailment that prompts parents to bring a child to a pediatrician or to pediatric ear, nose and throat (ENT) doctors such as the Pediatric ENT Associates in Birmingham, Alabama.

Children are susceptible to ear infections because the eustachian tubes that are responsible for draining mucus and other fluids out of the ear have not yet finished developing. With no place to go, bacteria-infused fluids get “stuck” in the middle ear, which may lead to discomfort and even infection.

If your child can’t tell you what’s troubling him, how can you tell if she has fluid build-up or an ear infection?

Nonverbal Clues Alert You to Distress

Looking for behavioral cues help you determine what is going on. Some cues alert you to a feeling of malaise such as when your child:

Signs that are more specific to an ear infection include:

If your child has the symptoms of an earache or an ear infection, you should schedule an appointment with a pediatric ENT specialist in Birmingham. Some earaches have no signs or symptoms at all.

How Is an Earache Diagnosed?

When you bring your child to your pediatric ENT, your doctor first conducts a physical examination. Your pediatric ENT examines your child’s ear canals with an otoscope to check the color of the eardrum. Healthy eardrums are light pink or gray and transparent. Inflamed eardrums are red and swollen. Your child could also receive a test known as tympanometry, which uses pressure to test whether the middle ear is working properly or not.

How Is Ear Pain Treated?

Children between the ages of 6 months and 2 years who have severe symptoms will also be given antibiotics. If their symptoms are mild to moderate, your pediatric ENT recommends a wait-and-see approach. The same approach is taken for children over age 2 as long as the symptoms don’t worsen.

If your child is in pain, your pediatric ENT may recommend over-the-counter painkillers such as ibuprofen to manage discomfort. A hot water bottle wrapped in a towel and pressed against the ear may also make your child feel more comfortable.

Children with chronic earaches can be treated with a myringotomy tube (ear tube), that allows built-up fluid to drain from the ear. Implanting an ear tube is a simple and quick procedure that is done in the pediatric ENT’s office. Most tubes fall out by themselves after about a year to a year and a half. Learn more about treatment options at WebMD.com.

How Can I Prevent My Child’s Ear Pain?

At the moment, no prevention protocols exist for ear infections because they may have many different causes. To reduce your child’s risk for an pain or infections in the ears:

Vaccines that prevent ear infections are currently in development.

Call Your Pediatric ENT in Birmingham

If your child has an earache or suffers from chronic ear pain or infections, call the specialists at Pediatric ENT Associates in Birmingham, Alabama. You can also contact us online.

Next, learn how to Find Out if Your Child has Hearing Loss.